How we build our mushroom farming business plan 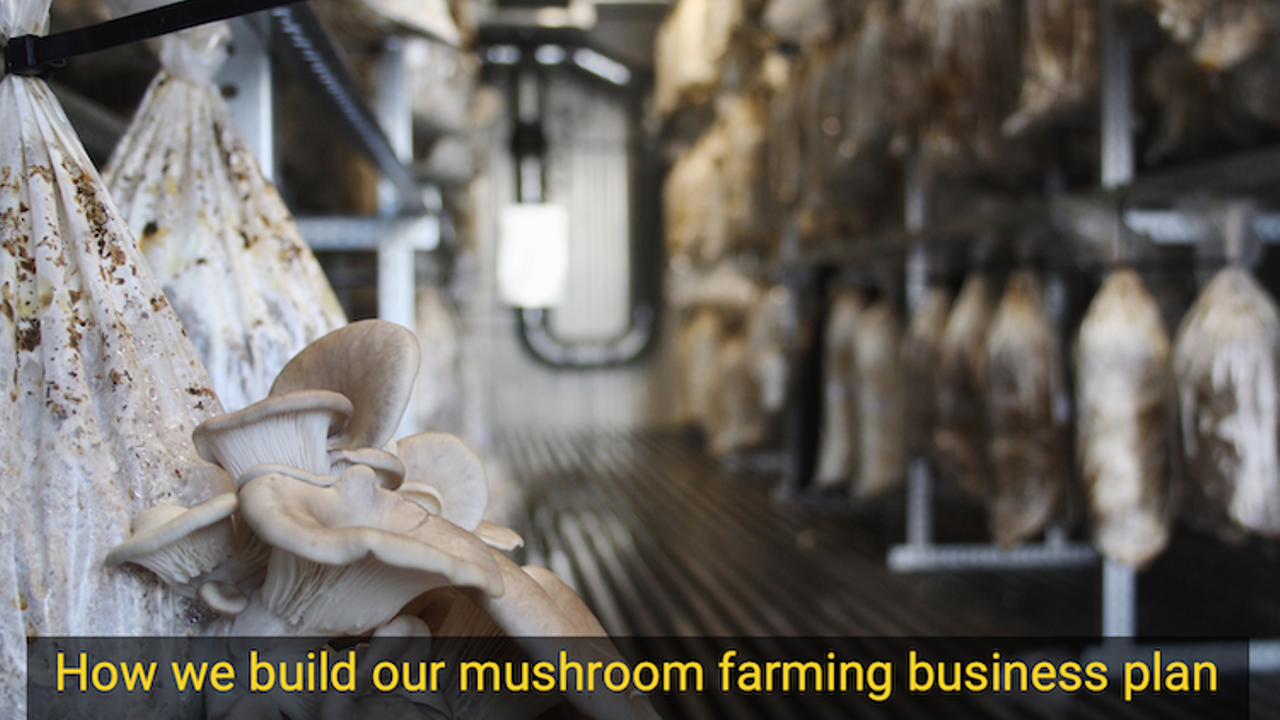 Profitable mushroom farming in an urban environment requires a different approach to farming. Let's talk about our mushroom farming business plan and let me take you on a trip in how we, since the beginning of 2013, gradually build a system of multiple cash flows to build a resilient business case.

Traditional agriculture has only one knob to turn and that is volume. The centralised production and processing of food has not only brought a lot of environmental damage it also forced farmers into a pile of debt.

A lot of farmers are struggling to make a living. As we share in our blog on the five different mushroom farm types, the investments are high and for sales, they are depending on only a few customers. This makes them vulnerable to shocks. The results of disruption can have a big impact.

In this blog, I want to walk you through how we gradually build and developed our business plan. With the knowledge available today, we would have taken a different approach, so read this in the context of how the availability of knowledge changed over the last 7 years.

When we started in 2013, we had no clue on what to do and what to expect. I and my co-founder Mark Slegers had a background in the corporate world. We both became corporate refugees and we were looking for meaning.

We wanted to make a difference and contribute to a society that uses raw materials to the maximum of its potential and produced food locally. We both got inspired by the book “The Blue Economy” by Gunter Pauli. In that book, Gunter describes more than 100 business cases of things you can do locally with waste. Growing mushrooms on coffee grounds is one of those business cases.

We had zero experience with mushrooms and fungus [except for eating them] but that business case resonated with both of us. I founded rotterzwam in January 2013 and Mark joined me a few months later.

Homebase
We were lucky to find a place for our mushroom farm fairly quick in the basement of an abandoned subtropical swimming paradise, in the city centre of Rotterdam. This location brought us two priceless advantages that we could not have planned for nor phantom at the time.

The place had a lot of attentional value because it was an icon of the city and even the Netherlands. It was the first subtropical swimming paradise that was built outside a bungalow park. Almost every person in and around Rotterdam had visited that place for a swim.

So when we had a police raid, looking for an illegal magic mushroom farm, the story was quickly picked up by the local media. The next day we were on the cover of the local newspaper. Since then the mailbox and our phone has been flooded with interview requests. It was the best marketing campaign starter ever. See here for an overview of the media coverage we had over the last few years.

The headline below says: “Tropicana gives the key to a mushroom farmer” 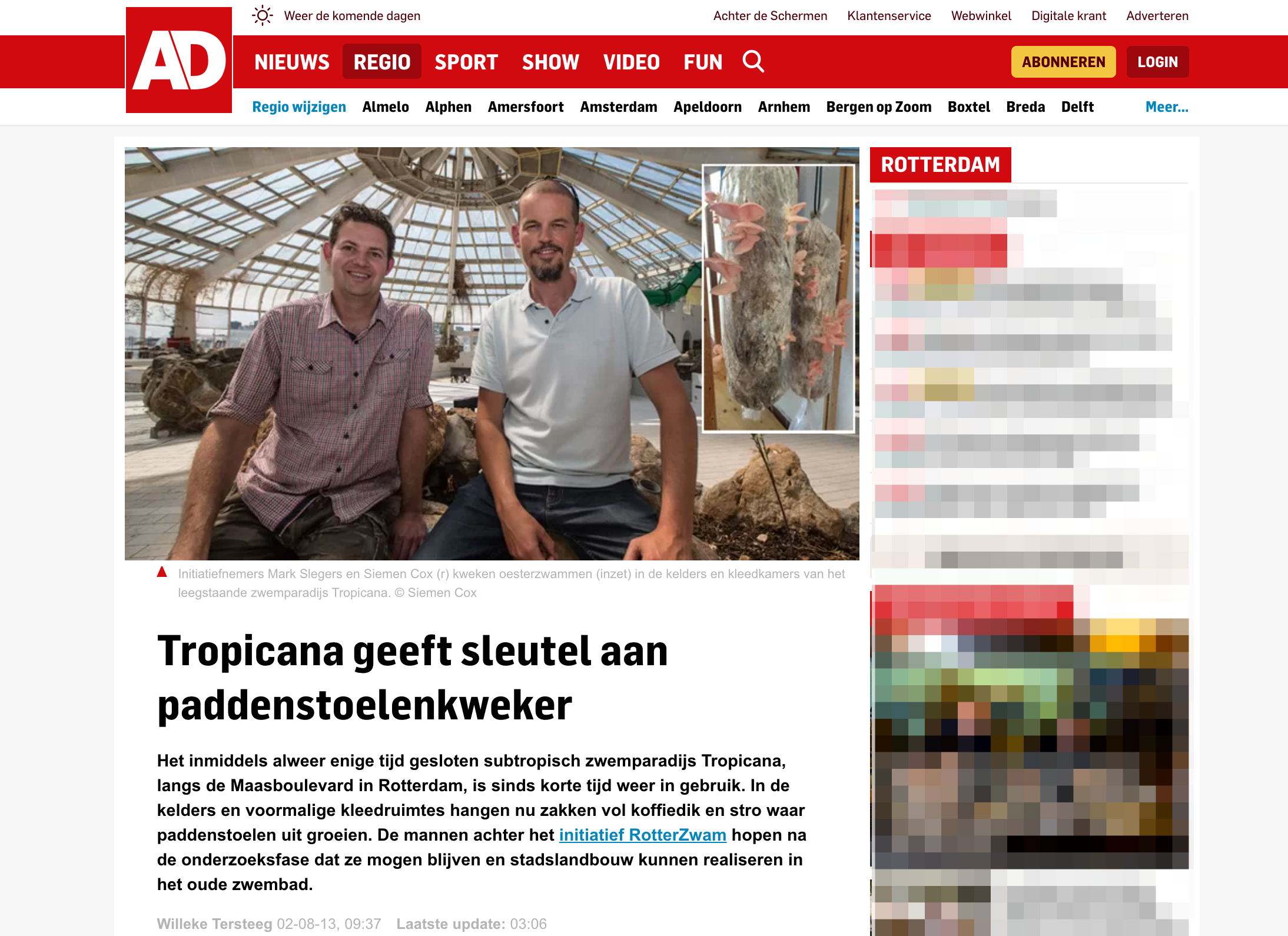 The media attention that followed was very welcome. We quickly expanded our network and got into contact with restaurants and chefs in the city. But the biggest advantage at the time was that we could experiment a lot in that place because it was so cheap. We had an anti-squat agreement and paid only €250 per month and that was for rent AND electricity.

So when you are starting a mushroom business in an urban environment it can help you a lot if you have access to a cheap location for your home base. There are several ways you can approach this. One is asking your local authorities for a place. There is always an abandoned site to be found where you can start your venture. But maybe some family member or relative has land available where you can jump-start your project.

Staff
The highest cost in any business is your staff. Last year [2020] the cost for our staff was 52% [€191.000] of our entire revenue of €365.000. So when we started the farm in 2013, we did everything ourselves. Only when we started to generate some cashflows, we hired our first employee so we could find time to work on strategy and develop new concepts and earning models.

Knowledge
When we started, we were not the only ones in the world growing mushrooms on coffee grounds. In the Netherlands, there was one company doing that. GRO Holland. We reached out and asked if they wanted to help us master this process. They declined to share any information as they wanted to maintain the head start to the competition. [Since then they have abandoned the whole collecting of coffee and the growing of the mushrooms process and outsourced it to a traditional waste collector and mushroom farmer. They only tell a story and sell mushroom-based products.]

In the UK there was also some farming activity, but no interest in sharing knowledge at that time. So, we had to master everything our self. It took us 12 to 15 months to figure out how to scale this production process to a profitable level.

But while you experiment, you are losing money in two ways. Malinvestments and missed revenue because you have little or nothing to sell. That is when we developed our Mushroom Master Program to share what we have learned. So far over 40 entrepreneurs joined that training, to skip those 12 to 15 months and create revenue from the first month of business.

Services
Our first cash flow was based on a service. We hosted a monthly workshop to teach people how to grow mushrooms on coffee grounds. We charged €75 for the full program including a lunch buffet. The participants made two big bags of substrate, one on coffee and one on straw. After the workshop, the participant got to take those substrate bags home and harvest the mushrooms.

It filled fairly good and every month we had approximately 12 to 15 people joining. This was our first cash flow. Between €900 and €1.125 of revenue.

We have created a pdf with the content of the complete schedule for both workshops. It’s available for free for the Members of the Mushroom Learning Network Community Platform. You might consider joining.

Since then that workshop has also been made available as an online course with English, German and Dutch subtitles. The course includes spawn, substrate bags and calcium carbonate that we send to home address in Netherland, Germany and Belgium.

We have developed a lot more service since then. For example, we get paid to collect the coffee grounds from our customers and recently we started a test for a subscription for mushrooms.

Products
Our second cash flow was based on a product. The rotterzwam Growkit. We noticed that a lot of urban farmers were not farming so much, they were selling Growkits. The most know was back to the roots in the USA. They started as a mushroom farm [as far as we can tell they do not do that anymore but let us know in the comments when we are wrong] and then developed a Growkit.

Their Growkit contained inoculated coffee substrate that they sold to various customers. Producing and selling these Growkits is 4 to 5 times more profitable than growing mushrooms, but we never liked the idea of these Growkits.

In the image below you can see a selection of the different varieties that have been around for some time now.

So why didn’t we like this concept? Because you are moving a waste stream from restaurants and kitchens to people at home. But 70% of the coffee is being used at home! So why should we bring a waste stream to people, when they produce this material at home?

Because we got a lot of attention, people were coming to our farm handing over the coffee they have collected. So that we could grow mushrooms on them. They found it a waste to throw it away in the garbage. That’s when we saw the light and decided to empower people to convert their own coffee grounds into mushrooms and become kitchen farmers.

Inspired by the running pot by GandaZwam we develop the rotterzwam Growkit. It was a world first. Over the last few years, it has inspired several Alumni of our Mushroom Master Program, to develop their own variety. 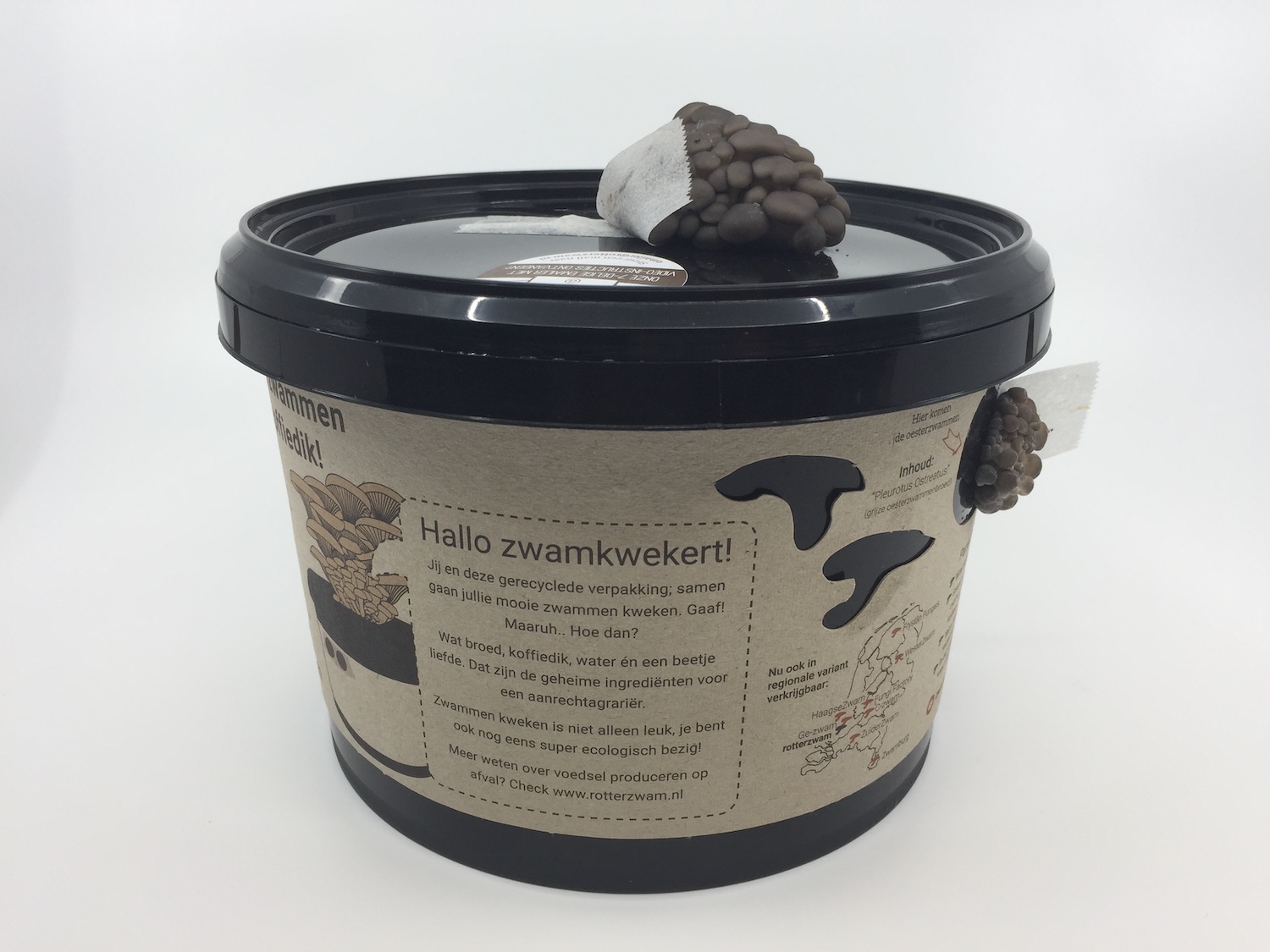 In this time-lapse video, you can see the mushrooms grow from our Growkit.

We have developed a lot more products since then. For example, our snacks [bitterballen and croquettes] do very well and we also introduced a coffee soap and a mushroom beer.

Cashflows
But why all these different cashflows? How is it benefitting and making the business profitable? Glad you asked. J

In 2017 we had a fatal fire in our former swimming pool. The soot that that fire produced completely destroyed our farm. We hid to let go of our staff and went back to basic. We screwed down the activities to a minimum and our revenue came for 100% from Growkits, snacks and our education program. The next year and a half we took the time to prepare to crowdfund to raise money for a new farm. [We raised €398.500]

If we didn’t have these other cashflows [Growkits, snacks and our education program], we would not have survived the fall out of that fire.

In 2020 corona hit the world. Like in a lot of other countries, there were lockdowns of businesses and restaurants in the Netherlands. Before corona, about 30 to 40% of our total revenue was derived from mushrooms sales. That plummeted to just barely 10% during corona.

Selling direct to consumers through different platforms dedicated to ‘support your locals’, our online store and launching a campaign called “Nederland werkt thuis, Nederland kweekt thuis” which translates to “The Dutch work at home, the Dutch grow at home”, we were able to sell a lot of spawn bags to facilitate the Dutch kitchen farmers or #aanrecht-agrariër as we call them.

If we didn’t have these other cashflows [selling direct to consumers and a vibrant webshop, the corona lockdowns would have seriously damaged our business. Now we were able to even make a small profit in this challenging year.

This is how our mushroom farming business plan gradually developed around having multiple cashflows. We highly recommend urban mushroom farmers, follow a similar approach. Because this really helps you to start profitable mushroom farming on a budget.

During our Mushroom Master Program, we go more into detail of these principles and we also give access to several of these earning models.

We love this mushroom business and we want to share this information with as much people as possible. We hope to inspire entrepreneurs all over the world to start a profitable mushroom farm, based on these principles.

Want to be kept in the loop? We can drop you a mail when we post something new. 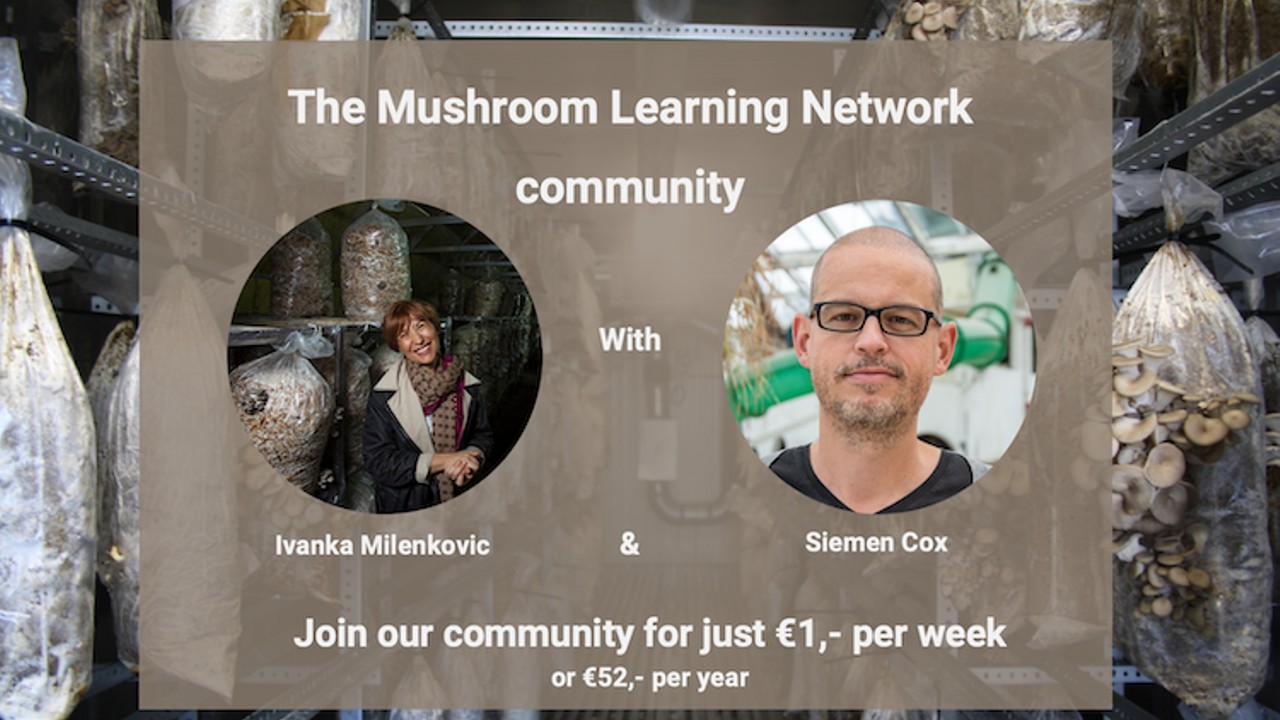 The focus of the Mushroom Learning Network Community Platform is on cultivating mushrooms in controlled environment. We use this group to connect mushroom enthusiasts throughout the world, share knowledge and help each other further. Join us to accelerate your learning curve! Get access to earning models.

how to start mushroom farm

Let us make things clear for you.

We only send an email when we post something new on our blog.